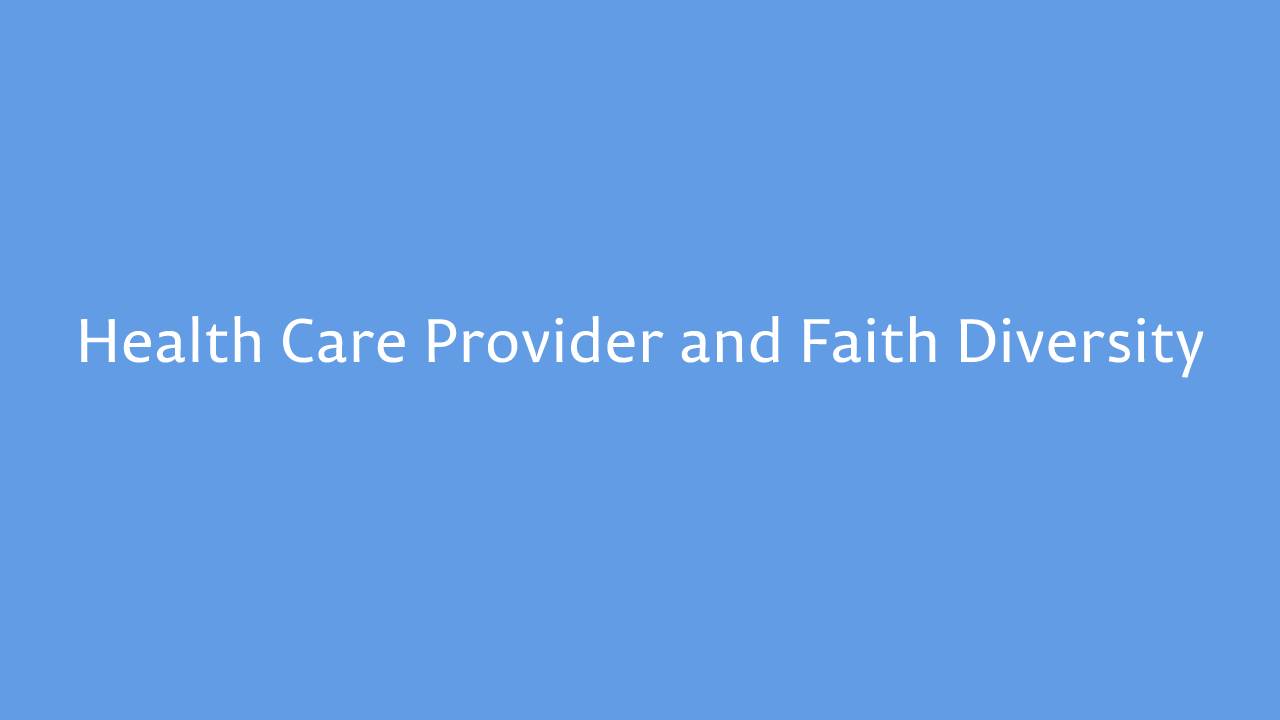 The paper provides a comprehensive analysis of the Christian and Buddhism faiths and their considerations on the health care providers in the light of the religious diversification. The paper also studies the peculiarities of these faiths and the impact they have on the healing process. The essay also looks at the paramount importance of considering by the healthcare providers the patient’s faiths and beliefs in their practice. On the one hand, the healthcare providers should not question their patients’ confession; on the other hand, however, they should fully utilize such information (if available) in the treatment. The patients of various cultures do not share the same beliefs on the health care systems and their healing process. There are some differences in the spiritual perspectives on healing in various cultures and religions. The paper, therefore, studies the issue and attempts to provide some explanations that address the disparities in the religious practices of the Christians and Buddhists.

A vast majority of health care providers have faced and adapted to the diversity in terms of belief, culture, and religion. They acknowledge that, for their business to thrive, they have to take into account the patients’ cultural and religious discrepancies. The multicultural nature of contemporary society is a result of globalization. Faith diversification, which means the coexistence of different faiths and spirituality, is very important in the treatment of patients. Therefore, the health care providers consider it necessary to acknowledge the diversification dimension in order to develop a cultural competency (Basu-Zharku, 2001). The purpose of this paper is to make a comparative analysis of the two religious philosophies in terms of providing health care services. The two faiths chosen for the research are Christianity and Buddhism.

There is a difference in the spiritual perspectives on healing of the Christians and Buddhists. The Buddhists follow the ideas and practices of Buddha, who taught his followers to overcome suffering by leading a simple lifestyle. In brief, Buddhism teaches to do good, do no harm, and meditate. When comparing the Buddhism and Christian beliefs in terms of the spiritual perspectives on healing, it is apparent that both religions call their followers to attain healing.

However, the healing process for Christians is quite different because they believe in healing through engaging in prayers and conversing with God. As for the Buddhists, they seek to strengthen their inner courage and improve self-confidence through meditation because they believe it influences the healing process. The Christian perspective on healing refers to Gods omnipotent power to heal his people (Ferngren, 2001). According to their traditional belief, God can heal any diseases. They integrate the concept of God’s will and traditional medical practices. The reason is that the Christians believe that God gives people the ability of making inventions and innovations in health care that will take care of his people through healing the diseases.

The Buddhists believe that, if an illness occurs, they can overcome it with their minds. Any change is always constant, and some events take place because an individual planted those seeds in the past. Similarly, the Buddhists consider that they should not disturb their bodies while healing (Cadge, 2004). The reason is that they believe that, even though, the physicians are knowledgeable, they are not compassionate, and the efficacy of the medicine they use is questionable (Kelly, 2000). In this respect, the two religions have differing spiritual perspectives on healing. The Buddhists’ emphasis on the meditation and mindfulness predominates. They believe that a patient has to reach the inner peace and quietness while staying in the calm environment for the purposes of fruitful meditation. They avoid any actions that may have an effect of undermining the thinking process or disturb their concentration.

The Christians put their emphasis on the miraculous healing and believe that the healing process is done by God. The Holy Spirit strengthens and builds up the body of a Christian (Basu-Zharku, 2001). Their spiritual perspective on healing also incorporates the concept of the Trinity and sovereignty of God. They believe that God easily forgives and saves all those who desire his salvation. The patients in both religions demonstrate their faith through prayers and meditation, which they believe can mitigate their suffering and speed up the healing process. Buddhism stipulates that a patient’s sufferings can be eased if he or she engages in meditation. According to the Christians, the suffering will not worsen if they engage in prayers, which are an important element of healing.

What Is Common to the Christians and Buddhists in Regards to the Spiritual Elements of Healing, Prayer, Meditation, and Belief?

The patients who follow Buddhism or Christianity share a common belief in seeking healing from the health care providers. As a rule, they do not have any problem with consulting the doctors as long as they allow them to practice some elements of their spirituality. They believe that these specific religious practices will speed up their healing process. The followers of the two religions also engage in prayers as they seek for protection and enlightenment. The praying aspect is a common thing for the two as they both hope that the patients will heal faster through praying and talking to their creator. According to Buddhism, a prayer is chanting while the Christians consider prayers a way of speaking to God. Among the Buddhist form of prayers, the one that is widely known for having a healing effect or improving the healing condition of the patient is bojjhanga paritta. Paritta is a term that means protection; the Buddhists believe that their chants will protect them. Similarly, bojjhanga is a word that means enlightenment in its most general sense (Cadge, 2004). The Buddhists believe that they will derive the utmost efficacy from chanting, which is their form of prayer, only if they recite it accurately with conviction, sincerity, proper accents, and from the bottom of their hearts (Kelly, 2000).

As for the Christians, they believe that God intervenes in their healing through the prayers. Similarly, both religions show some level of commitment to the idea of praying with sincerity and conviction. The Christians may also speak in tongues that have a very deep religious significance. They also share a strong belief in the miraculous healing. Through the Holy Spirit, the Christians can also pray for healing. They believe that they have the same Holy Spirit that Jesus received during his baptism; thus, it grants the right to authority, love, and power. In fact, according to the Bible, Jesus taught his followers always to pray for healing and gave his Disciples the authority, power, and the Holy Spirit to perform healing (Mathew 10: 1-7). The two religions also believe that, when a person is spiritually concentrated, he or she will not become ill. In the case of any illness, they believe that the patients can be cured by maintain a positive mindset and not exposing their bodies to harsh natural conditions.

What Is Important to Remember for the Health Care Providers when the Patients Spiritual Beliefs Differ from Their Own?

The patients of faith consider important the recognition of their distinct beliefs and practices by the health care providers in fostering their healing process. They will find it vital to have a specialist, who is culturally competent and looks into the dynamics of different faiths across cultures. The patient-provider relationship can undergo an enhancement phase that will necessitate the diversification of the workforce. A healthcare care facility system that is culturally competent will eliminate any ethnic or racial disparities. The patients also expect that their health practitioners can develop a form of cultural sensitivity and utilize the relevant in different situations of different individuals across various environments (Gross, 2014).

The importance of cultural sensitivity will help avoid any cultural presumptions for any patients so that they are all treated according to their faith and religious traditions. In addition, embracing cultural sensitivity assists the health care providers in the prioritization of the learning needs so that they can be in a better position to incorporate the corresponding beliefs in the patient’s system of care. The patients of faith will also expect the health care providers to have a clear comprehension of the non-verbal communication strategies that used in their distinct cultures. The knowledge will be of paramount importance in the administration of the healing procedure because any misinterpretation of this information may lead to miscommunication because of cultural variances (Young & Koopsen, 2005). For example, the members of some cultures avoid the eye contact in order to show their respect while the others use eye contact to show they are attentive.

Healthcare providers can adopt a multidisciplinary approach in attending their patients. They should remember that the patients want their health needs to be taken care of according to the unique peculiarities of their religious beliefs (Kliewer & Saultz, 2006). Some patients may have some personal items or belongings that they will need in their healing process, and they should not be asked to leave them. These personal items may vary from prayer shawls, bottles of oil, Bible, Quran, or other religious attributes.

What I have learned from the research is that the main goal of the healthcare system is not attaining an in-depth knowledge of the intricacies of the religious and spiritual traditions in various cultures. It should rather aim at demonstrating genuine interest and respect towards various religious groups, as well as embracing the cultural diversification. The conveyance will necessitate the engagement of the patients’ religions in the healing process. In this way, the health care providers will be in a position to satisfy the patient’s multidimensional needs. For their business to thrive, they have to take into account the patients’ cultural and religious peculiarities. The patients develop some trust if they recognize that the health care provider can focus on their beliefs. They obtain an assurance that practitioners understand their ways of life and can incorporate them in the healing process.